Specifically, oregano.  Surely oregano is one of the most popular herbs used in cooking, and is one of the easiest to grow in the herb garden. But if you think all oregano is created equal, you’d be wrong.  There are several herbs with similar flavors that have “oregano” included in the common name of the plant: Mediterranean Oregano, Mexican Oregano, and Cuban Oregano to name a few.  Sometimes these plants are not even in the same family, but can often be used in similar ways.  If you want to grow them for cooking, though, you need to learn the differences, as even though they are similar in taste, they will not add the same flavor to your dishes.  I’m not an expert on oregano, by any means, but here are a couple I have grown, and some information for those of you who would like to know some of the differences.

The mainstay of Italian cooking would have to be Mediterranean oregano, and it is the one most commonly sold (at least around here) as potted plants for your herb gardens.  It is a low growing, spreading sprawl of a plant, with smallish leaves and the flavor you associate with pizza and spaghetti sauce.  It is easy to grow, at least for me, and in Florida becomes a tender perennial which lasts years in my garden, even if neglected.  It is a member of the mint family.

Mexican oregano is known to have a similar but much stronger flavor than Common or Mediterranean oregano. It is less sweet, with a hint of citrus.  It is a member of the verbena family (which is probably why it reminds me so much of lantana), and makes a small, deciduous shrub.  It goes better with Mexican foods, such as chili, than with Italian dishes.

The third “oregano” I have grown is sold as Cuban oregano around here, though it may be sold under different common names in other parts of the country.  It is really an attractive plant, having large, fleshy leaves, and comes in a green form, or a variegated one.  One leaf chopped up is enough to season quite a big dish, so use it sparingly. The plant has been grown commercially, and is used as herbal treatments for coughs and throat problems, though I would urge caution before using any herb for medicinal purposes unless you know what you are doing.  Just because something is natural, home-grown, or organic doesn’t mean it isn’t dangerous if used incorrectly.  But this plant is so pretty, I grow it just for the hairy, variegated leaves alone. It is a plectranthus, related to Swedish ivy, and several other ornamentals. The plant has an upright growth habit, and looks great mixed in with various coleus. 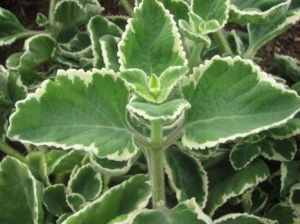 And there you have it.  A bit of info on three plants sold as oregano that can actually be used in cooking, as well as just for pleasure in your garden.  Google the Latin names and you will find tons of information on how to grow them, if you aren’t sure what will work in your area.